Exceptional Beyond Expectations; Deaf and Blind, and Living with Emanuel Syndrome 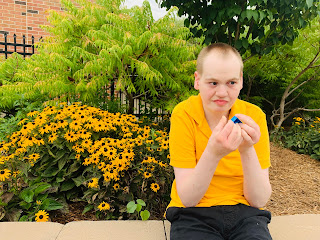 This is a summary of the paths that led to finding a support system for our son Steven, who has Emanuel Syndrome. Steven is now 28 years old.
In The Beginning:
On the night of Steven's birth, March 18, 1993, we had no expectation of any surprises. There had been several early miscarriages between our second son and Steven. As a result we had been referred for genetic testing in 1991 to McMaster Hospital, Hamilton, Ontario, Canada.
Once the genetics results were available, we met with a Genetics Counselor. It was at this appointment that we learned my wife was a balanced carrier of ES (at that time called “partial translocation 11-22”). We were advised that the miscarriages were a natural function of selection – that the miscarried fetuses had the unbalanced anomaly. We asked if there was any chance that such a fetus could develop to full term. We were advised that there was absolutely no chance of this occurring – that such a fetus could never fully develop due to extreme malformation, missing organs, etc. We were told to keep trying and enjoy our next child when the time came. We later learned that this counsellor was well past retirement, but had been a renowned pioneer in genetics and was helping out by doing a little counselling.
Steven came into this world, just after midnight on March 18, 1993. His was a normal natural birth, although a bit slow to respond and lower Apgar than his brothers had been. Our family GP who had delivered Steven suggested we both get a good night's sleep and that the baby would be well cared for in the nursery. He said he would meet us the next morning at 9:30am.
Day One:
The 9:30 meeting revealed that our GP had spent most of the night researching, ordering tests, reviewing results, and consulting with specialists. He explained that Steven had genetic markers: ear pits, micro-penis, low-set nipples and that it was likely he had the unbalanced genetic anomaly inherited from his Mother. Steven also had a cleft of the soft palate which would require corrective surgery before the age of one. On the positive side, Steven had all his organs and they were functioning properly.
Our GP then explained that this genetic anomaly had no known surviving cases- there would be no handbook to tell us what to expect regarding our baby's development, the severity of his disabilities or his life expectancy.
However, our GP did give us one piece of advice that still rings true today: Allow Steven to show you what he is capable of.
The Early Years: 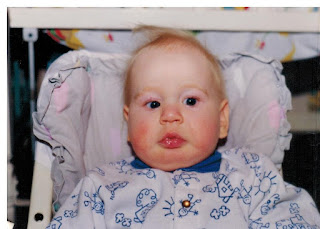 We had a follow-up with the Genetics Lab at McMaster when Steven was a few weeks old. It was a different Genetics Counselor this time. He started off the conversation with “What were you people thinking?”. We were taken aback and defended ourselves as best we could. In the end, he apologized for the incorrect information we had been given by the previous Genetics Counselor. In some cultures, we might have chosen to take legal action, but we decided that it would not change Steven, and moved forward with as positive an attitude as we could muster. 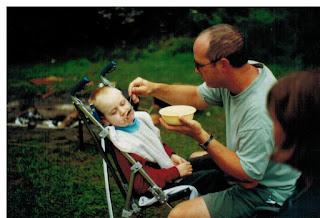 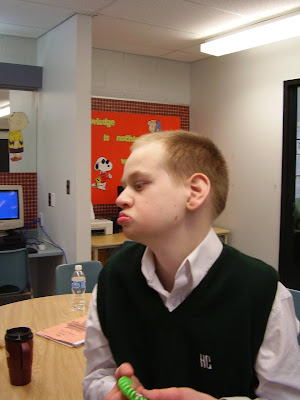 Steven remained in the public school system but attended a class for children with a variety of special needs. He and his class teacher were supported by the visits of the specialist teachers for the deaf-blind from WRMS, through their monthly visits during the school year.
You may be familiar with Interpreters for the Deaf – someone who can translate spoken words to sign language for the hearing impaired. A Deaf-Blind person is supported by an Intervenor, whose purpose is to enable a deaf-blind person to live independently, and to function in society. They provide communication through whatever means work best for that individual. The Intervention Model was founded through the work of Annie Sullivan, the person who enabled deaf-blind pioneer Helen Keller.
Intervention is a one-to-one support model, and Steven received Intervention during his primary and secondary school years.
During the summer vacation months, CDBA was able to provide funding to bridge in-home Intervention for Steven, intended to carry in-school fundamentals of communication to our home setting. We generally hired and trained university students for this role.
When Steven was 13, we were encouraged to have him attend WRMS's Residential School Program. This meant he would leave on a bus Sunday nights and return home Friday afternoons. He was housed in a dorm with other deaf-blind students and attended the school during the day. It was a very difficult decision for us to “let go” so Steven could attend Residential School. Keep in mind that then as now, Steven is very much like an infant. He is diapered, does not self-feed, and requires one-to-one support for all functions of his existence. He had one-to-one Intervention during the school day but shared support with other students while in residence.
Sadly Steven's health declined during the one semester he was there, to the point that he could not return to the school. Looking back, I realize that letting him go for that one semester provided us with a glimmer of hope for his future – we had decided that he would not live with us forever, that someday we would let him go.
Steven's high school years were spent in a Roman Catholic School. The support system was pretty much the same through those years, with the key exception that the Catholic system had a lot better funding, equipment, and a much more healthy attitude towards the individuals they supported.
When Steven was 19, we were contacted by CDBA with the news that there was an opening for him at a group home for the deaf-blind in Brantford. We knew that we could not turn down this opportunity, as openings with such organizations rarely occurred.
Steven stayed at that the Lions McInnes House group home for three years and then moved into a newly constructed apartment-style complex for the deaf-blind in Paris, Ontario. 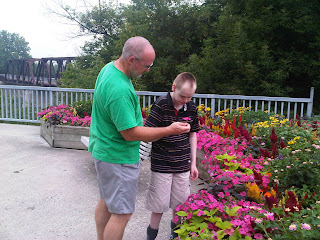 A Word on Communication:
We communicate with Steven using ASL signs or signs adapted on his body, keeping signs simple, and within his field of vision. Steven also has used visual concrete cues, pictures, and tactile cues. He is a very easy-going person and has pretty much figured out the routines of his life.
Steven has ways of communicating things to us. He has a beautiful smile and a laugh that brightens any room. He will stamp his feet if he is tired of walking. He purses his lips and does a sucking motion if he is thirsty or hungry. He will yell and wring his hands if he is in distress from an esophageal spasm, and might also tap his chin or throat. He will clap if something excites him.
The most difficult issue with communication has been that Steven cannot describe to us where or how he is hurting. Many doctors and specialists have found this to be a difficult problem in diagnosis, and they have to rely on our observations of how Steven is acting in order to seek out the source of the problem(s). 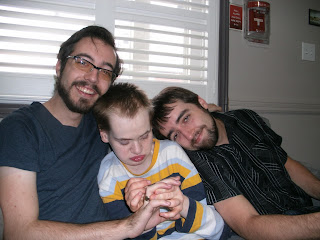 Finding a place:
As you can imagine, much of our time raising Steven required us to be advocates for his rights, his health, his education, and his place in our society. The process had many positives and many negatives, but in the end, I feel we did the best that anyone could have done for Steven.
Over the years we have learned so much through connections with people and organizations. It was a remarkable evening when Stephanie St. Pierre called to introduce herself to us, and to share that there were other people with the same chromosome anomaly as Steven. Her connection with us helped diminish our feeling of being alone and has led to a lasting friendship.
Others that have played a role have been many, but include:
It was only through a lot of networking that we found the organization that best supported Steven and ourselves, and where Steven belonged.
For us, the most important support network came about because of the “bonus” disabilities of deaf-blindness. Currently, Steven lives in a small apartment in Paris, Ontario, owned and operated by Sensity (formerly CDBA), and is supported 24-7 with Intervention.
The Canadian Deaf-Blind Association(CDBA) re-branded two years ago and is now named Sensity – Deaf-Blind and Sensory Support Network of Canada.
Scott Richards, Steven's dad.
at November 22, 2021 No comments: 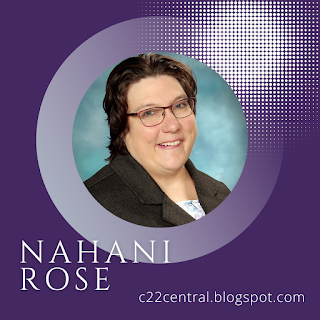 Self-Care: what it is and why we need it.

A few years ago, when I was battling family stuff, I learnt a valuable lesson from a supervisor I had, working the group homes in my area.

It’s a simple concept but many of us do not know how to do it. When you are a caregiver it is so easy to forget yourself. This is why my ‘’family stuff’’ happened when it did. I didn’t know how to flip the switch. And, focus on me, too. So, I was burnt out.

Definition: Anything you can do for yourself that makes you feel good.

I am allowed to do this? Lol. I really thought life was all about looking after others!

What helps us feel good?

Good hygiene, especially, is so important but hard to learn at times. There are resources for people out there.

Having more than just our basic needs met.

Don’t always put others first, put yourself first! There really is truth in this; if you are not 'together', everyone around you will struggle. It’s important to have balance. I gave to get because that is all I knew. Love was conditional.

Self-care comes from a basic nursing concept that I learned as a Health Care Aide when younger. Everyone needs to have their basic needs met. When we don’t have needs met, that’s when things can go a bit awry, we develop poor coping mechanisms and things like OCD to help us achieve what we are missing.

Here is a chart of Maslow’s Hierarchy of needs. It is a guide for anyone.

What I share here for this website is based on my own experiences, thoughts and feelings as a person with 22q11. My purpose in sharing is to help those who may be just learning, and have young ones, and may feel overwhelmed. I know what has and hasn’t worked for me, and I want to help those who do feel overwhelmed, feel less overwhelmed.  This does not mean my suggestions ‘’will work for you,’’ but, they are suggestions, and I hope that if they do work, YAY! My hardship will help those not have the same experiences as I have. I am not a doctor, psychologist, nurse or other practitioner.

Exceptional Beyond Expectations; Deaf and Blind, and Living with Emanuel Syndrome

This is a summary of the paths that led to finding a support system for our son Steven, who has Emanuel Syndrome. Steven is now 28 years old...