A Favourite Christmas Memory of Steven 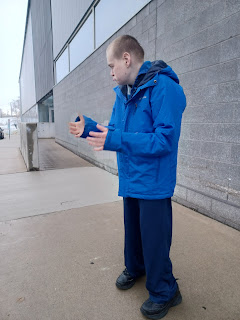 My favorite memory of Steven was the day he "let go" and walked independently for the first time. It was Christmas Eve, 22 years ago in the year 2000. We were spending Christmas with Sherry's family in Barrie, Ontario. There wasn't much space for Steven to move around in his walker at Grandma's house. He used a large square metal frame walker, with castors at the four corners of the base, and with a padded hoop around his chest. He was pretty good at scooting around our house in it, but Grandma's didn't have much space.

We bundled up and I drove over to the local shopping mall for some exercise. At that time Steven would walk pretty well as long as I held one hand or the other, or both. His balance was not great, and with the rigid AFO's his gait was quite akin to Frankenstein. I needed to be alert for any changes in grade, floor texture, floor colour, metal thresholds, sidewalk cracks and steps-because Steven was unable to distinguish such changes as being hazardous. When walking him and such a change was at hand, we would stop and provide a cue to step over or up carefully. Being Christmas Eve, the mall was quite busy with last-minute shoppers. After parking, Steven and I walked through the slushy parking lot and into the mall. Once inside I had him sit on a bench to remove his snow boots and coat and put them in the backpack.

Prior to that day, Steven had never taken independent steps. On this day, however, Steven was more inquisitive than usual. For some reason, the circular racks of clothing on sale for Christmas drew his attention, and he would pull me towards them so he could look closely at the colours, feel the textures, and touch the tags. If there was any back-lit signage he would pull me over to touch and tap them- such was his pleasure.

As we walked along I hoped to avoid a particular clothing rack that held some more expensive items and began leading Steven around it in a wide arc. Surprisingly, he shook away my hand and took two tentative steps toward his target before I got ahold of his hand again. I thought he had done this intentionally, but I wasn't sure.
It was getting close to suppertime so we worked our way back to the mall entrance. Along the way, he again shook away my hand to step toward something. This again seemed intentional, but I wasn't sure.
I parked Steven on the bench and got his snow boots, winter coat, and toque on him. Directly across from this bench was situated a brightly lit Jewelry store. As soon as I got Steven to his feet, he was off, all on his own, towards that store entrance. When he had crossed the tiled floor of the mall, he stopped at the point where the tile ended and the carpet of the Jewelry store began. Steven carefully raised his left foot and stepped onto the carpet, as if it may have represented a change in height. Steven then took three more careful independent steps and slapped his hands on the glass display case filled with bright, beautiful shining trinkets. He also put his drooling face on the glass and smiled with joy.
I will always remember that Christmas Eve as the day Steven achieved his greatest skill, and with it, the ability to explore, to choose, and to communicate his wishes.

Steven still wanders off when he's out with me, if only for a few steps on his own. His support workers get kind of freaked out when he wanders from the cart at Walmart or the grocery store. But for me, it still makes me so very proud and happy for Steven, and as long as he is able I want him to enjoy this taste of freedom.
Thank you Steven for this gift, my favorite Christmas memory.
at November 16, 2022 No comments: 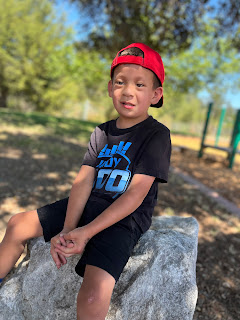 James Desmond Holt was born in 2015 on the dynamic day of the Autumn Equinox. He was so little and so beautiful! It was hard to believe that within the first 2 weeks of his life he would be diagnosed with Emmanuel Syndrome, poked and prodded by countless specialists, and undergo his first (of 9) surgeries. 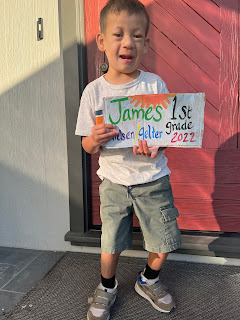 The first year involved weekly doctor appointments and therapy sessions. We watched our perfect boy grow, learn and experience this world. We vowed to do everything we could to help him reach his potential. But, the biggest surprise of all is how much we learned from him - unconditional love, strength, perseverance and our own potential with the human experience. 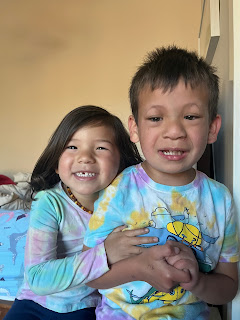 He is the center of our hearts and desires, and without him we, his mom, dad and little sister, would not be a family. He is our fearless leader into the unknown, defying every single odd they throw at us and charming all that meet him. Today he not only walks and talks, but he runs, jumps, climbs, sings and dances. He laughs and shrieks, cries and sticks out his lower lip when he's sad. You know he loves you when he hugs you and blows you kisses.
-Karen
at November 16, 2022 No comments: 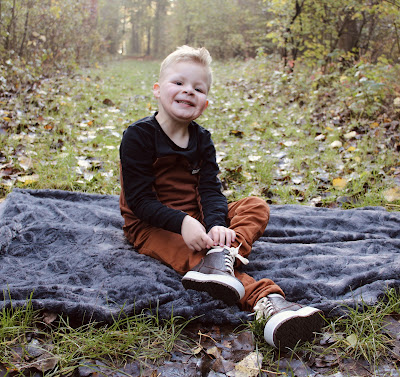 My name is Quin. I have Emanuel syndrome. I am 6 years old and live with my dad, mom and little brother Stef in the Netherlands.
I'm always happy and I like to play with my family.
If you want you can follow me on Facebook and Instagram @Quintanis. There I share what I experience in daily life.
Love, Quin
at November 15, 2022 No comments: 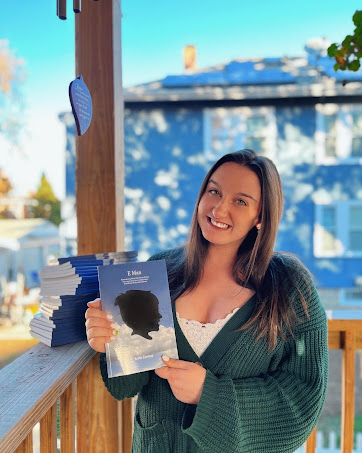 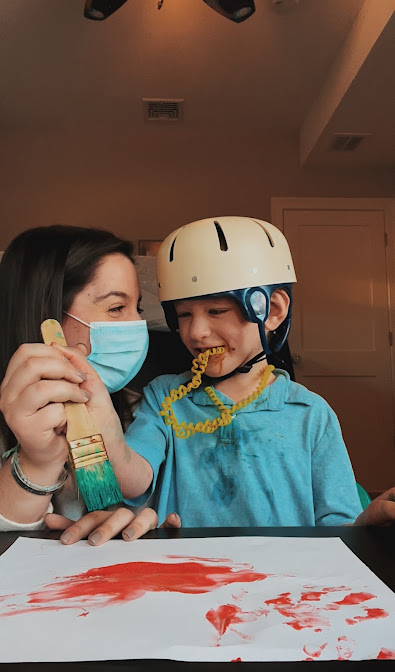 I am extremely proud to announce the release of my new book, E Man. This book is about my life-changing experience with Ethan Wall. I was Ethan‘s in-home behavior technician for New England ABA for three years.

Ethan Wall passed away on March 20, 2022, due to complications from Epilepsy in Phelan McDermid Syndrome.

This book goes into detail about our time working together, discussing his individualized strengths and weaknesses, along with what worked for him and what did not, and stories that deserve to be shared. It also has research regarding Phelan McDermid Syndrome, Autism, and Applied Behavior Analysis.

I am also pleased to announce that all profits will be donated to the Phelan McDermid Syndrome Foundation.

You are able to purchase this book using the link below.

Please share with family, friends, colleagues, etc. to help get the word out about this book.

The world is going to know Ethan Wall‘s name. 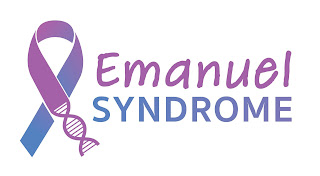 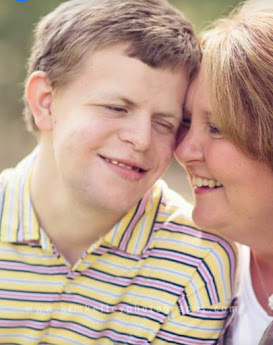 My son, Tyler, was born (in 1992) before his genetic abnormality was even named!
When looking for information, I kept finding the same single page of minimal information. Then I found a support group on the very young internet. All information at the time was in print in the form of newsletters.
Tyler was different health-wise than most other children featured in the newsletter. I treated him as normally as possible, even with his obvious issues of being nonverbal and developmental delays. 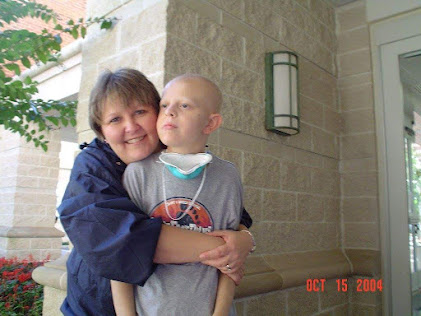 He was diagnosed with leukemia in 2004. He was treated and is a survivor!
Fast forward to Facebook! I was reunited with the support group! Seeing the many other children like Tyler from around the world has been so amazing!
Comparing, discussing, and knowing we are not alone has been amazing! What a special family we have! 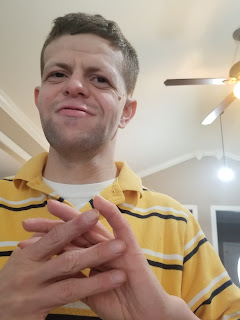 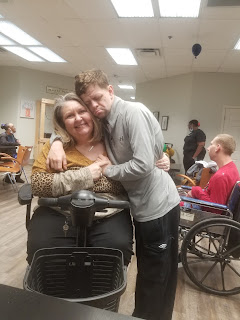 Tyler is now 30 years old! What a true miracle he is! 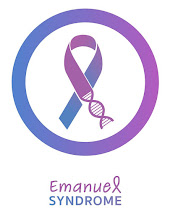 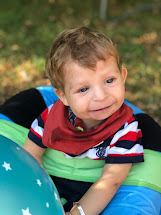 Boris was born full term by section and we didn't realize anything was wrong until he refused to eat and his cleft palate was noticed. A day later he was rushed for life-saving surgery as it was found he has an imperforate anus. It was the longest and scariest day in my life, but he made it.

We spent two months in the hospital and together with the palate he was also diagnosed with PFO, micrognathia, stridor post-intubation, airway abnormalities, duplex kidneys, and undescended testicles. A month after his birth he was diagnosed with Emanuel syndrome which explained everything. Last year Boris was admitted to the hospital once to have his peg placed as he is entirely fed by it and we are waiting for three surgeries in near future. He is currently one year and three months old and can't roll or sit independently but he smiles daily and brightens our lives. 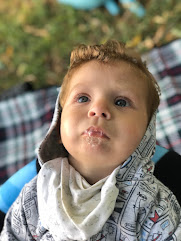 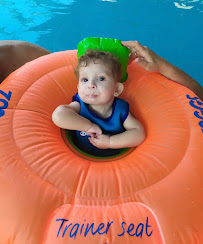 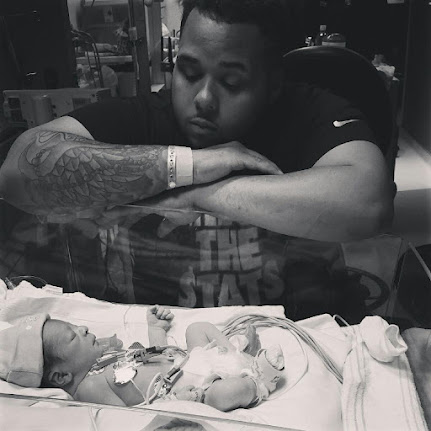 My son is Kaysen he is 7 years old. Kaysen is the strongest person I know. Every day no matter what is going on with him he has a smile on his face. We were told at about 20 weeks Kaysen would have Emanuel syndrome and my world came crashing down, But Kaysen quickly taught me the meaning of life and showed me real love, resilience, strength, faith, and much more! Kaysen can walk assisted and take steps unassisted, he can eat by mouth, and can communicate using pictures and eye gaze when he wants of course. I might be biased, but he is also so beautiful inside and out. 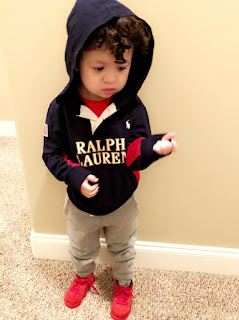 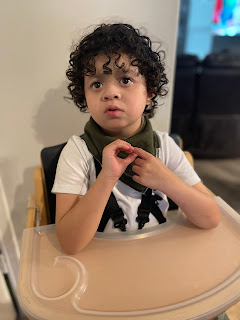 You can find Kaysen pretty much always with his leg crossed, laughing at Mickey Mouse, or trying to convince someone to spin him around for thrills. I thank God every day for my amazing little man. I chose to share Kaysen with the world to be able to help a mom overcome their diagnosis or to help a family find the right diagnosis.
-Tracy
at November 12, 2022 No comments:

A Favourite Christmas Memory of Steven

My favorite memory of Steven was the day he "let go" and walked independently for the first time. It was Christmas Eve, 22 years a...